There are several reasons Why Do Some Knives Have a Hole In The Blade. Sometimes, there’s a functional purpose behind this type of design. Other times, albeit this is often not the case, knives have holes in their blades just for aesthetics’ sake.

Depending on the type of knife you own, the holes might be there because of:

Several kitchen knives have holes on the sharp side of the blade, also known as dimples. They are placed there to help the chef – or whoever is handling the knife – to cut different types of food more efficiently by avoiding suction on the blade as it slices through.

The dimples allow the blade to move more smoothly through meat and vegetables, especially in larger pieces.

There are two reasons as to why a knife manufacturer would want to reduce the weight of its products.

First, there’s an economic reason: less weight means less metal used, and in exchange, a lesser cost. A tiny bit of metal in one knife might not mean much, but when you take into consideration mass production, tiny holes start to add up into cutting costs.

On the other hand, the reduced weight makes knives more comfortable to carry. Less weight can be life-changing (and even life-saving) when it comes to hunting, exploring, and tactical operations.

Several pocket knives come with a hole on the top of the blade and not on the sharp side. This is placed there to help the owner open the knife in difficult situations where both hands are not available, and you can only open it using the fingers of one hand.

A hole on top of your knife’s blade allows you to hold your knife and open it with your thumb.

4. Being Able To Be Hung

While most people believe a knife is supposed to be hanging at the waist level or kept inside their pockets, several knives have a hole in their blade to be able to be hung from the wall.

This is often done for decorative knives. It’s also a common occurrence in certain types of conventional knives, like a cleaver and other butcher knives.

Most holes have a specific function and a reason to be there. Sometimes, we do not know why they are there – and unless you think out of the functional box, you might not be able to understand why. Some knives have holes in their blade simply because it looks good!

Most of the time, holes in the blade makes the knife look better! For some reason, holes in your blade add a certain factor to the knife and make it cooler.

Several high-end knife manufacturers decide to sign their knives by placing a hole in a certain place across the blade. The more people buy their products, the more will recognize them by their signature – the hole in the blade.

This is a common marketing tactic that isn’t employed in the knife business alone. A lot of products have a certain trademark on them that is recognized by people who know about the subject.

When it comes to knives, holes usually have a purpose in mind other than a signature, though!

A hole in your knife’s blade opens up a world of opportunities for you to explore. The hole could be there for the many reasons listed above, but it can also be for something else entirely.

It could be added onto a gun for a hand-to-hand combat approach, it could be used to be better attached to the knife’s sheath, and plenty of other things. A hole in your knife adds versatility, and it might transform your knife into whatever you can think of!

What Kind of Knife Has a Hole in Its Blade?

There are a lot of knives which have holes in the middle. Regular kitchen knives, butcher knives such as cleavers, hunting knives, tactical knives, pocket knives – the list goes on and on!

The main difference between each other is where is the hole placed. When it comes to kitchen knives, the holes are placed in the sharp part of the blade. Butcher knives have it on the other side, on top of the blade. Knives used for hunting and other tactical purposes often have it throughout the blade and not in one specific place. Pocket knives have it on top, close to the handle.

You have to take into account different knives that have different holes. You might find a kitchen knife with holes on top and a cleaver with holes on the sharp part of the blade. That’s the great thing about knives: they come in all kinds of shapes and sizes!

Is it an Advantage or a Disadvantage To Own a Knife With Holes In Its Blade?

Whether having holes in your knife is an advantage or disadvantage depends on the quality of your knife and what you use it for. If you’re using your knife for something that benefits from the holes your blade has (for example, slicing food using a kitchen knife with dimples) then, by all means, it’s a complete advantage for you!

On the other hand, if you have no use for the holes your blade has, it might be a bad thing to have them there, especially if you bought a cheap knife. A hole in your blade means the knife is less sturdy and will last less than a regular knife with no holes – this is especially true among cheap blades.

There’s also a disadvantage in using a knife with holes, even if the holes have an intended use. Following the kitchen knife example, you might have to be extra careful when cleaning the knife as different bits and pieces of food might get stuck into the blade’s holes.

More often than not, holes in your knife is a good thing – if you know why they are there and how to use them!

link to Top 7 Best Butterfly Knife & Trainers - How To Pick One?

The Butterfly or Balisong is an unusual knife gaining in popularity due to the rotating handles that hide the blade allowing for concealment. Due to the unique nature, users can engage in a...

Continue Reading
link to What is T10 Steel? Is It The Best For Katanas?

So you want a katana. Great choice! There are few swords that are as legendary and mystical as these. However, not every katana can live up to its name. Dozens of cheapos that’ll... 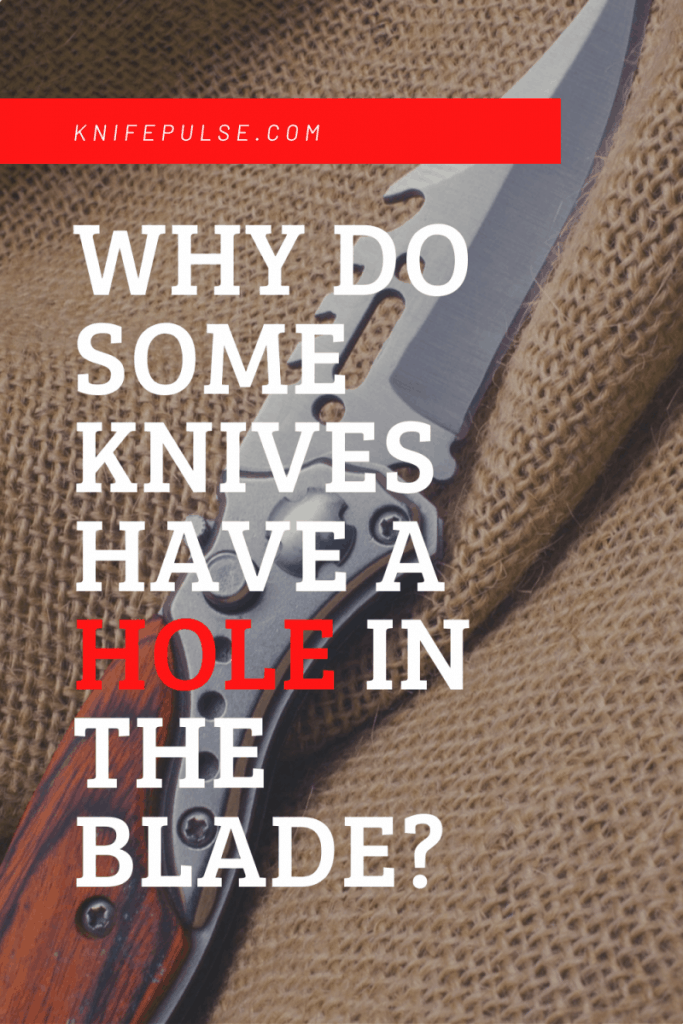