If you’re into leatherwork, or if you’re thinking of getting into it, you need the best tools. One tool that you should have around is a skiving knife.

Skiving knives are special knives made specifically for leatherwork. They look like joint knives that painters use, except their blade is narrower, and their sides are straight.

These knives are used for only one thing, but boy do they perform that task well.

So what exactly are they? How do you use them? And how can you keep your skiving knife nice and sharp?

Today, we’re going to answer all of these questions and more. Welcome to my complete guide to skiving knives.

What are Skiving Knives?

Before we look at skiving knives, it’s important to know what exactly skiving is.

Skiving is the process of shaving off leather to make it thinner. This is done by trimming the edges of the leather.

There are a lot of ways that skiving is used in leathercraft. That’s why instead of forcing regular knives to do this task, the skiving knife was invented.

Skiving knives are made for one thing: skiving. That’s why their design, shape, and features all make this task a lot easier.

The most common types are the diagonal blade, curved blade, and the curved diagonal blade. The best blade for you will depend on what type of leathercraft you work on. If you need intricate turns, you may want to get one with a curve.

You’ll also find some strange variations. Some look like hook knives, while others look like a shaving razor. These look nothing like skiving knives, but since they were made for the task, they still qualify as one.

Most of the time, though, when you say skiving knife, you mean the standard type.

How to Use a Skiving Knife

Whether you’re crafting a leather bag or belt, you may need to attach two pieces of leather together. The problem is, when you do this, the attached part is going to be thicker than the rest of your piece.

To deal with this, you need to skive the leather first.

What this means is that you need to shave the part to be attached so that it becomes thinner. Skiving knives allow you to get the smoothest feather edges on your leather. This way, when you attach the two pieces together, it doesn’t bulge out anymore.

That’s just one way that skiving is useful in leathercraft. There are a dozen other ways you can use this technique for your projects.

The most basic way to use a skiving knife is to use it for push cuts. First, identify the area you want to shave. Then take your skiving knife, face the blade away from you, and push against the leather to shave it off.

If you want an accurate edge angle, you’ll have to be a little more careful. Instead of just pushing against your leather right away, you want to make a marker first. You can use the tip of your skiving knife to “draw” a line where you’re going to work.

With that, you’ll use the side of your skiving knife to slice that area off. You can see this technique demonstrated in this video:

If you already have other leatherwork knives, such as a head knife, you might wonder if you still need a skiving knife.

The answer is yes.

Having a skiving knife will make your work so much easier. This is because its design has several advantages over other blades.

For one, skiving knives have a very wide bevel. When you first look at this knife, this is one of the things you’ll notice right away. The entire blade is also quite thin.

It’s designed this way to make it easy to shave leather. When you use this, the leather will slide right on top of the blade. If you had a narrow bevel and a thick blade, it would be difficult to push against leather.

Another great thing about skiving knives is how ergonomic they are. They feel super comfortable in your hands, so you can work for hours without getting tired.

And it’s not only comfortable, but it also gives you so much control. In fact, professionals still use skiving knives despite having all the machines they need. For them, nothing can trim leather as intricately as a good skiving knife.

All that said, skiving knives are only good if they’re sharp. If your skiving knife is dull, you’ll find that it is worthless. That’s why it’s so important to keep yours sharp.

But how do you sharpen your skiving knife?

How to Sharpen a Skiving Knife

Whenever you get an unusual knife like this, it’s very important to learn the proper method of sharpening.

The good news is that skiving knives are super easy to sharpen.

So how is it done?

You can sharpen your skiving knife in 4 easy steps.

First is what type of blade you have. Do you have a diagonal blade? A curved blade? Or a curved diagonal blade? It’s important to know because there’s a slight difference in how to sharpen each one properly.

Keep in mind that if you’re using the hook or shaving razor type of skiving knife, this sharpening method won’t work.

The next thing you need to check is whether or not your knife really needs sharpening. A lot of times, a good stropping is all it takes to give your blade a razor-edge.

If you find your skiving knife is only slightly dull, strop it instead. But if you find that it can’t cut your leather smoothly anymore, then you know it’s time to sharpen.

To get your skiving knife to top condition, you’ll need a few things.

Obviously, you’re going to need a sharpener. You can choose between sharpening stones or water sandpaper – whatever works for you. You may want to avoid electric sharpeners, though, as these can easily damage your blade.

You’ll also want to have a leather strop around. For me, sharpening is only half of the process. You always have to strop your blade once you’re done to give it the best finish.

It may be an odd knife, but skiving knives are super easy to sharpen. The only thing you have to be careful of is the way your blade is shaped.

To sharpen, locate the bevel-side of your knife and place that down on your sharpener. You want to work at an 18-degree angle.

Then all you have to do is push your skiving knife against the sharpener. If your blade has curves, make sure to tilt along the curves as you sharpen. This way, you’ll be working on the entire blade.

To know when your knife is sharp, feel for a burr after a few strokes. This is the best way to know when it’s time to stop sharpening.

Once you feel a burr, your knife should be sharp. But it won’t be razor-sharp just yet. To get this, you need to hone it.

Since you’re working with a skiving knife, you probably have a lot of leather lying around. Use one of these as your strop. To do this, all you have to do is rub your knife against the leather.

Keep in mind that you don’t want to push against the strop like you did while sharpening. If you do this, the blade will bite into the strop. Instead, you want to polish your blade by pulling.

A lot of people skip this step, and it’s a big loss for them. Stropping doesn’t only polish your blade, but it also removes the burr and creates the sharpest edge possible.

So you see, it’s very easy to sharpen your skiving knife. You can also check out this video for a demonstration:

My Recommendation For The Best Skiving Knife

Skiving knives are unique knives. They aren’t the most versatile tools to have, but they perform their job better than any other.

So if you’re into leatherwork, this is a must-have tool. Why waste time and energy trying to get the perfect trimming with another blade, when you can get one that is made for this task?

And now that you know the proper way to sharpen your skiving knife, nothing can stop you from crafting the most amazing leather pieces.

Zero Tolerance is one of the most well-known companies in knife making. They are known for producing some of the most beautiful combat-ready knives that rank amongst the most popular knives on the...

Continue Reading
link to Is a Machete a Knife or a Sword?

Machetes have a dual history, considered tools and, sometimes, powerful weapons of murder and violence. The Rwandan genocide is a testament to the dark potential purposes of this agricultural... 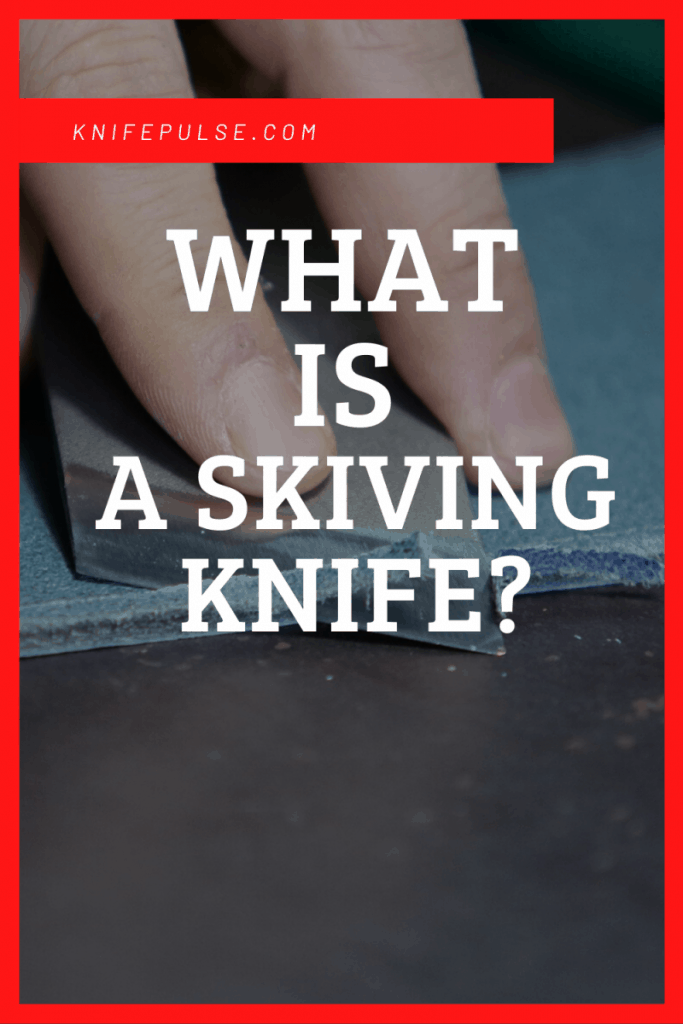